​​Why does Sydenham need a local plan?
Under Sydenham’s current classification we will be required to allow 5-10% growth by 2033 (approximately 10 new houses).  There have been several planning applications for new houses in the village and wider large-scale development in towns such as Chinnor and Thame. All of this highlights the need for Sydenham to be proactive and able to have a say in how the village is developed. 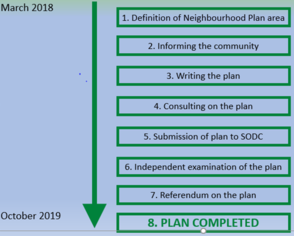 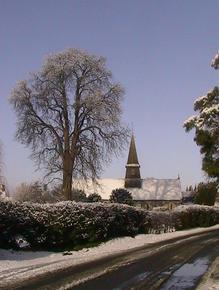 ​​What does a Neighbourhood Plan cover?

A plan can be broad in scope, including housing, business premises, transport and development of amenities. For Sydenham, the focus is on housing.

What can a Neighbourhood Plan do and not do?

​It is expected that the process to develop and adopt a Neighbourhood Plan for Sydenham will take approximately 18 months.

​​​Neighbourhood Plan Referendum 26 March 2020 postponed
As a result of the ongoing concerns about the spread of COVID-19, the decision has been taken to postpone the neighbourhood planning referendum due to take place in Sydenham on Thursday 26 March.   SODC will confirm a new date in due course as soon as the government has said that it is safe to hold public events again - this will ensure that everyone who can vote in the referendum is able to do so.
All electors will receive a poll card with the revised polling date and that postal voters who have already cast their votes for the referendum on 26 March will receive a fresh one in due course and will need to use that to vote in the re-arranged referendum.

​​​​​​All the members of the team are volunteers and comprise of a number of people from across the community of Sydenham, including:
•       Mark Kermack (Chair)
•       Tara Glen
•       Michael May
•       Mark Oliver
•       Toby Roe
If you have any questions or wish to contact the team then please email sydenhamnpg@sydenhamvillage.co.uk and they will come back to you.

meeting minutes, presentations and other

In June 2019 the Parish council submitted its draft Neighbourhood Plan (NP) to SODC. It was then reviewed by SODC and a specialist external examiner, who made a few comments that were incorporated into our final plan, which SODC then deemed could go to referendum.
Our NP was due to go to referendum within the Parish in the Spring of last year 2020 but was put on hold by Central Government due to the pandemic, until May 2021. The NP does carry significant weight in planning decisions in the village nevertheless.
A new Local Plan was adopted by SODC in December 2020 - which has some areas of variance against the Core strategy that the original NP had been drawn up against.
Fortunately due to the approach that was taken in the preparation of the Sydenham NP there is only one section of supporting text  that requires a minor amendment (para 5.9 within policy SYD1).This is simply the removal of the a specific definition of site areas that were appropriate for development  (0.2 or 0.1 hectares) relative to the two parts of the village and replacement with  “the scale of infill should be appropriate to its location and reflect the position of Sydenham West and Sydenham East in the settlement hierarchy".
SODC consider it is necessary to consult with the Parish over this amendment, to ensure alignment between the NP and the Local Plan. This will be done over a seven week period from 15th Jan 2021.